How Does Minoxidil Work

How Does Minoxidil Work?. Prior to the minoxidil way of working in regrow hair, it's good we first understand the cause of hair pattern baldness. Research indicates that the initial programming of pilosebaceous units of hair follicles begins in utero. The physiology is primarily androgenic, with dihydrotestosterone (DHT) the major contributor at the dermal papillae. Men with premature androgenic alopecia tend to have lower than normal values of sex hormone-binding globulin (SHBG), follicle stimulating hormone (FSH), testosterone, and epitestosterone when compared to normal controls. Although follicles were previously thought permanently gone in areas of complete hair loss, they are more likely dormant, as recent studies have shown the scalp contains the stem cell progenitor cells from which the follicles arose. This however, only applies to non scarring hair loss, which preserves the hair follicles, unlike scarring hair loss, which completely destroys the hair follicles. 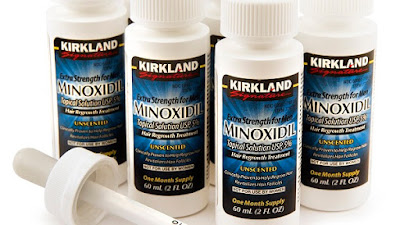 Transgenic studies have shown that growth and dormancy of hair follicles are related to the activity of insulin-like growth factor (IGF) at the dermal papillae, which is affected by DHT. Androgens are important in male sexual development around birth and at puberty. They regulate sebaceous glands, apocrine hair growth, and libido. With increasing age, androgens stimulate hair growth on the face, but can suppress it at the temples and scalp vertex, a condition that has been referred to as the 'androgen paradox'.

Men with androgenic alopecia typically have higher 5-alpha-reductase, lower total testosterone, higher unbound/free testosterone, and higher free androgens, including DHT. 5-alpha-reductase converts free testosterone into DHT, and is highest in the scalp and prostate gland. DHT is most commonly formed at the tissue level by 5α-reduction of testosterone. The genetic corollary that codes for this enzyme has been discovered. Prolactin has also been suggested to have different effects on the hair follicle across gender.

Also, crosstalk occurs between androgens and the Wnt-beta-catenin signaling pathway that leads to hair loss. At the level of the somatic stem cell, androgens promote differentiation of facial hair dermal papillae, but inhibit it at the scalp. Other research suggests the enzyme prostaglandin D2 synthase and its product prostaglandin D2 (PGD2) in hair follicles as contributive.

These observations have led to study at the level of the mesenchymal dermal papillae. Types 1 and 2 5α reductase enzymes are present at pilosebaceous units in papillae of individual hair follicles. They catalyze formation of the androgens testosterone and DHT, which in turn regulate hair growth. Androgens have different effects at different follicles: they stimulate IGF-1 at facial hair, leading to growth, but can also stimulate TGF β1, TGF β2, dickkopf1, and IL-6 at the scalp, leading to catagenic miniaturization. Hair follicles in anaphase express four different caspases.

How Does Minoxidil Work?
The mechanism by which minoxidil promotes hair growth is not fully understood. Minoxidil is a potassium channel opener, causing hyperpolarization of cell membranes. Hypothetically, by widening blood vessels and opening potassium channels, it allows more oxygen, blood, and nutrients to the follicles. This may cause follicles in the telogen phase to shed, which are then replaced by thicker hairs in a new anagen phase. Minoxidil is a prodrug that is converted by sulfation via the sulfotransferase enzyme SULT1A1 to its active form, minoxidil sulfate. Several studies demonstrated that the activity of sulfotransferase in hair follicles predict minoxidil response in the treatment of hair loss.

Minoxidil is less effective when there is a large area of hair loss. In addition, its effectiveness has largely been demonstrated in younger men who have experienced hair loss for less than 5 years. Minoxidil use is indicated for central (vertex) hair loss only. Minoxidil is also a vasodilator. Two clinical studies are being conducted in the US for a medical device that may allow patients to determine if they are likely to benefit from minoxidil therapy.

Minoxidil is a growth stimulant that stimulates already-damaged hair follicles to produce normal hair. Minoxidil does not, however, provide any protection to the follicles from further DHT damage. When a follicle is destroyed by DHT, minoxidil will no longer be able to have any more regrowth effects on that follicle. Other treatments include tretinoin combined with minoxidil, ketoconazole shampoo, spironolactone, alfatradiol, and topilutamide (fluridil)